Honestly, I have forgotten exactly how many surgeries she experienced before the age of two.
I can think of at least six. Some were more minor – some, well, you get it.

Part of the road of parenting a sick kid is having to enter into a lifelong dance with the hypothetical. It is not a dance I initiated myself, instead it was one that started in a hospital room surrounded by Bella’s “team”. It is one in which I looked out at a sea of serious faces, clipboards, stethoscopes, and white coats. And I listened intently, taking copious notes of all the potential situations we could find ourselves in with our Bella, and what the protocol was for each and every situation.

One of those hypotheticals was Bella manifesting PTSD at some point in her journey, in which she would begin to relive her early, early, childhood trauma.

Well, we are there, folks.
We are in it.
And it is really tough.

About a month ago, as I was beginning to research what resources we had available to us, I just kept feeling this nudge – “what about a dog for Bella?”

Now, this seemed to be quite nonsensical to me as we live in a flat where the building has a “no pet” policy, for one. Also, I knew enough to know that the process for a service dog was a long and arduous one and quite frankly – we just did not have the time to wait for such a pet, given Bella’s specific needs.

I looked into comfort dogs.
But they are not covered under the ADA, which means legally such a dog could not go to blood draws, etc. with Bella, nor could we legally have the dog in our home.

I had just about given up.

While visiting my sister, I told her about this nudge I had been having. She mentioned she had a friend whose mother was involved with service dogs.

Before I knew it, I was on the phone with my sister’s friend’s mother and this is what she said,

“I think we might have a dog that has been waiting for Bella.”

This breeder of golden retrievers, who has been doing this for decades, knows within about 4 weeks of a puppy’s life, what that particular puppy is meant to do. Within the first month of Owen’s life, the breeder knew that Owen was meant to be a service dog. And his trainers began training him accordingly, not having any idea for whom they were training Owen.

A couple of weeks ago, we road-tripped down to San Diego to meet Owen. We spent time training with Owen, meeting the trainers and the breeder. Owen is now 13 months old, and because the staff knew from so early on what Owen is meant to do, he is already almost fully-trained as a service dog and ready to be with his girl, Bella!

It really is uncanny, folks.
Owen is Bella in dog form.
I know that sounds ludicrous, but they really are two peas in a pod.
And because of this, Owen knew he was meant for Bella, and Bella knew that Owen was meant for her. As I watched the two of them, I saw Bella’s shoulders relax, I saw the wrinkled, furrowed brow disappear, and I saw a glimpse of the beloved, empowered, and whole girl I pray for Bella to become. 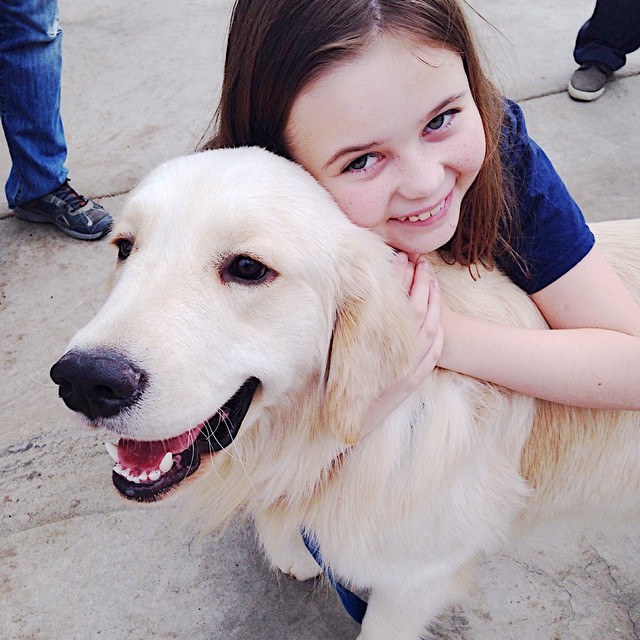 The weekend is one I will never forget. As I shared Bella’s story with the two trainers, we shared tears together. Owen’s main trainer, who has been with Owen since birth, told us that our family, our story, and watching Bella with Owen has had a profound impact on him and his staff.

We bring our Owen home for good the weekend of Jan. 10th. We are enjoying preparing for his arrival – picking out dog bowls, toys, and treats. 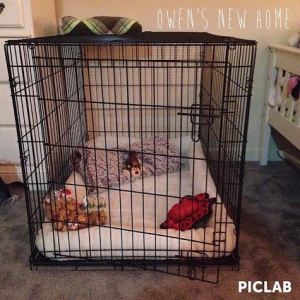 Dear Village – this process has been a miraculous one. And because of the GoFundMe campaign to which so many of you so generously contributed, the cost of Owen has been fully covered. Well, our portion anyway. Because, you see we only had to pay about 20% of the cost of a service dog. The rest of his training has been covered.

And we have no idea how.

As we enter the holiday season, I find myself drawn to the Christmas Story – to Mary, the mother of Jesus.
Upon the birth of Jesus, Mary witnessed miraculous things all around her. There is a verse that says that

“…Mary treasured up all these things and pondered them in her heart.”
(Luke 2:19)

This Mama is treasuring and pondering.

Thanks be to God.

6 thoughts on “Owen For Bella.”