I started swimming when I was four years old.

I joined my first swim team competitively at age 5 and for the next 8 years – I never took home a ribbon that was not 1st or 2nd place in any event.

My swim coach, Dave, was the type of coach every kid should experience. He saw the potential in every kid he coached and received no greater reward than to push until that potential was fully achieved. He loved to celebrate milestones and he did so with fanfare.

Around the age of 12, Coach Dave pulled me aside and told me that he would love to coach me year round, with the intention of getting me to the place where I could qualify for the Junior Olympics.

I lasted about six months. 🙂

I joined the high school swim team my freshman year. For the first time in my nine years of swimming, I was told that how I LOOKED in a bathing suit was as important to my swimming career as my times.

The pressure to be a size 0, to only eat carrots for lunch every day, to eat a meal and then subsequently throw it up in the locker room stall brought my competitive swim career
to
an
end.

But that is not even the worst part.

Over the past 20+ years, I can name the number of times I have been in a pool to swim laps, where there might be other people around me.

Some of you know exactly what I am talking about.

Recently, I found my way back to the pool. 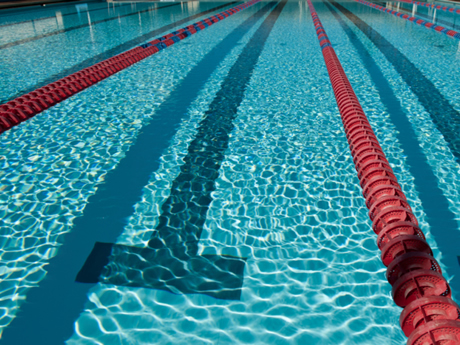 And how my body feels when I get out!
A hallelujah chorus.

I gave the voice of a coach too much power over me.
A man, who many years later was my colleague and whose career unraveled due to how he treated female students and colleagues.

I gave the voice of other women too much power.
I allowed their own issues to be put upon my shoulders and then I willingly carried the weight around for years like a martyr.

I inadvertently have been sending a message to my daughters that unless one reaches unattainable (and ultimately unwanted) perfection outwardly, one is not worthy of enjoying certain things.

If it weren’t for my husband and my daughters, I may have never been able to enjoy the pool again.

My husband, who knows my body more intimately than anyone else, who finds me to be  beautiful, who only has eyes for me, watches me swim now and says things to me like,
“Carrie – you are utterly breathtaking when you swim.”

My daughters, who tell me over and over again,
“Wow, Mom, you can really swim!”
or
“Mom, I just love to swim with you!”

Why did it take me so long to get to this place?
When did I replace the voice of man/woman with the voice of the Giver of All Things?
How did I allow a false narrative to replace a God-given part of me?
I’ll never know the answer to that, but friends –

I made it.
I’ve reclaimed it.
I have shed that skin of shame and lies.
And now –
It’s time to go